The Czech Republic currently has the most newly confirmed cases of Covid and most Covid-related deaths in the World. How did a small country in Central Europe gain this achievement?

In case you don’t know the Czech Republic: we have about ten million inhabitants, we are very good at brewing beer and even better at drinking beer. The black dot in the middle of Europe is us: 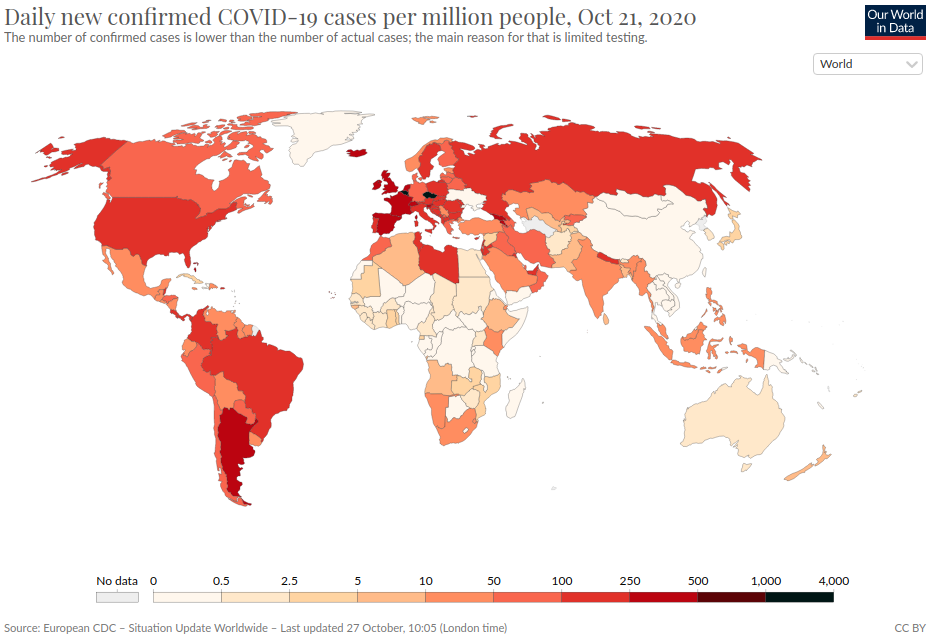 We excelled in the first Covid wave. It all started with Petr Ludwig and his video about face masks. He inspired us to sew the cloth face masks at home as they are quite an effective way to stop spreading the virus. And we did it! Another trivia for you: half of the Czech families have sewing machines at home. Immediately, we stopped sewing socks and pullovers and every sewing machine in the country was producing one cloth face masks after another. People were walking on the street giving away free face masks. We were all on the same boat and we were trying to help each other! I had never experienced anything like that. Later, a full lockdown was introduced and cloth-stores were considered “essential business” and they stayed open.

We thought we were so good we had to teach the others. The Prime minister of the Czech Republic, Andrej Babiš, sent a tweet to Donald Trump to teach him how to fight Coronavirus.

I don’t think Donald listened. He was probably busy injecting bleach to his veins. Ok, so we were good in the first wave. We had only a few thousands of infected people and a few tens of Covid-related deaths. We were fine. More than fine, this is our prime minister bragging about beeing “best in covid”:

Remember this face, you’ll see it a lot in this story. How did we mess up the second wave sooooo much?

The first case was confirmed on the first of March. The ten-thousandth confirmed case was on the 13th of June. We needed three months to get ten thousand cases. On the 23rd of October, we had 15,254 confirmed cases in a single day and 33 % of all tested people were positive. That is how we messed up. What the hell happened?

The Mystery Man with a Mathematical Model

On the 7th of March a managing director of an insurance company, Pavel Řehák, was worried (don’t try to pronounce his name, the letter “Ř” is a Czech specialty such as wearing socks in the sandals). At that time, Wuhan was in full lockdown mode and Italy had a few thousand cases and their pasta stores were about to be invaded.

Pavel wanted to know what is going to happen in Czechia. He sat down and opened the most genius software in the world: Microsoft Excel. Because you cannot predict the pandemic using Microsoft Powerpoint. He wrote down a number of confirmed cases to that day in a cell. Then, he added 25 % more cases and he wrote it down to another cell. And then another 25 % to another cell etc. You get the idea. 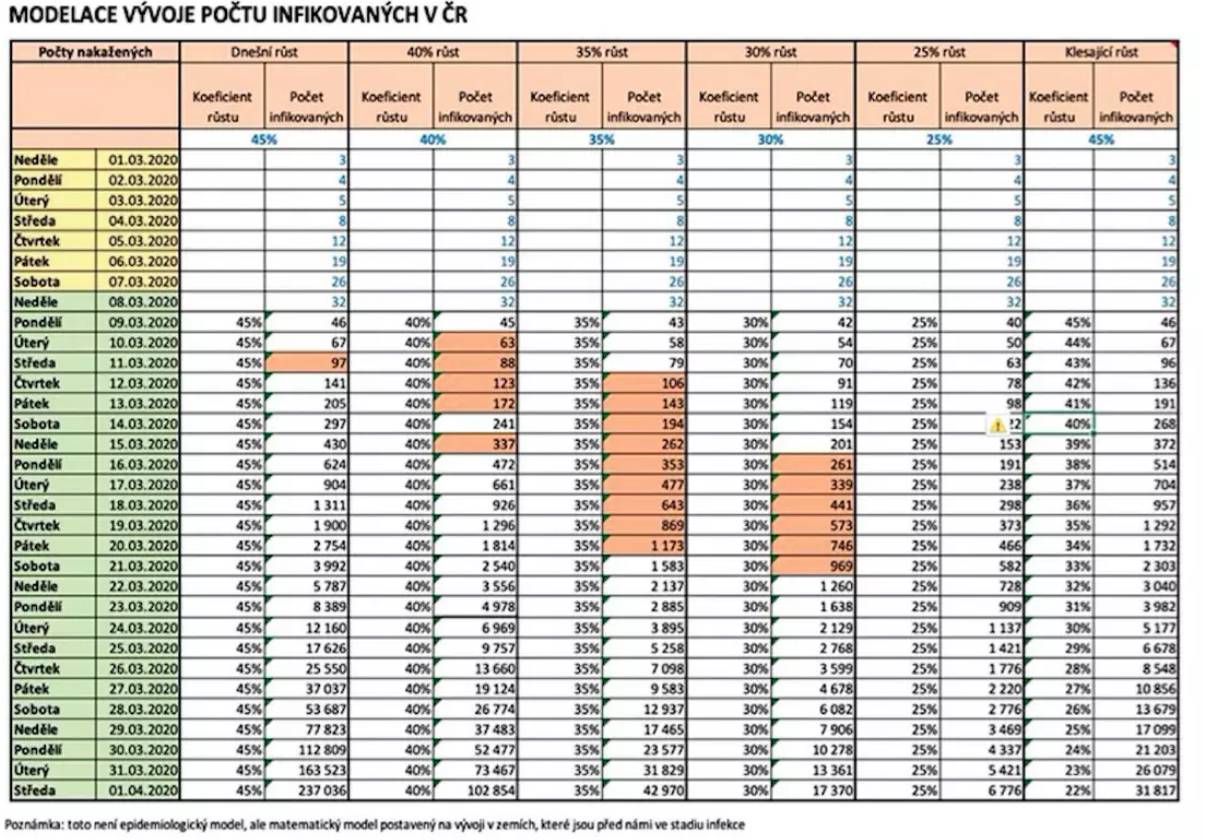 And this “mathematical model” worked. The real numbers of confirmed cases matched his model. And Pavel was even more worried because the government did nothing at that time. And since he knew Minister of the Interior of the Czech Republic, he wanted to show him the numbers. But hey, they must have had their own scientists and epidemiologists, right? The minister must have laughed at his stupid Excel spreadsheet and showed him real analysis made by real scientists, right?

Well, that would happen in a sane country. This is what happened in the Czech Republic: the minister of the Interior was shocked. This was the first time he had seen such a prediction. But hey, he was no minister of health. Why should he care, right?

Se they went to see the minister of health. At that time Adam Vojtěch was the minister. Fun fact about him: he is young, he can sing and he was quite successful in the Czech version of the Superstar competition: 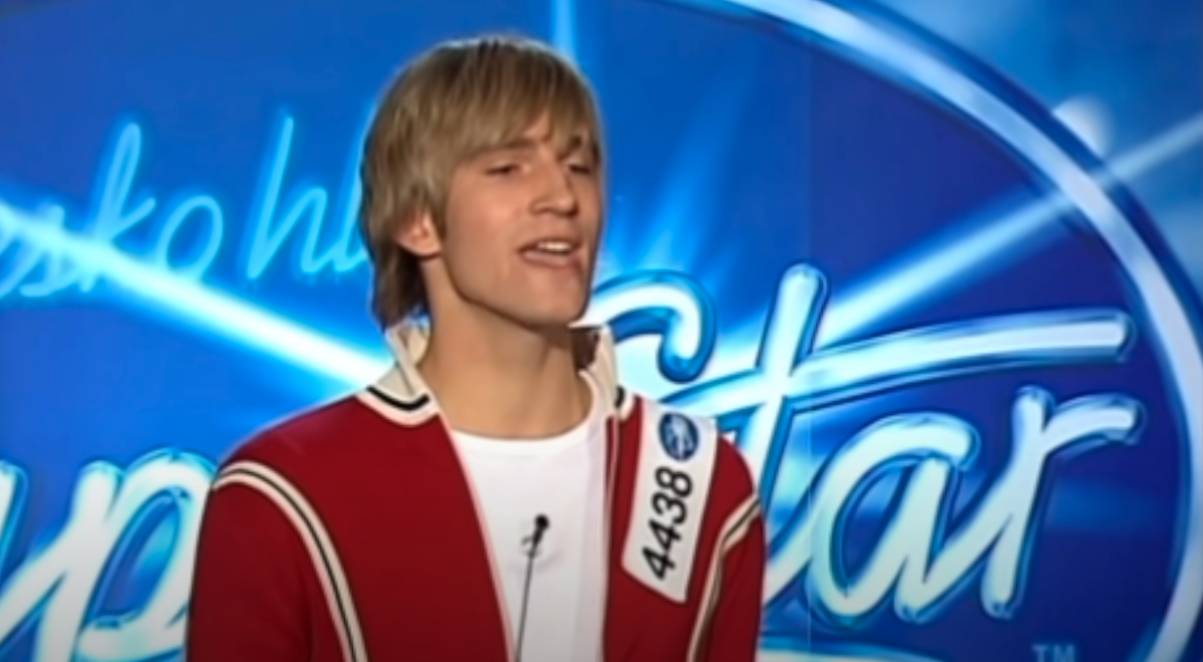 Anyway. What do you think? Yes. The minister of health was shocked too. The same story. They went to see the prime minister Andrej Babiš. And what do you think? He told them it was bullshit and he didn’t care. It took another three days until he was convinced Covid was going to be a problem in the Czech Republic.

Not because of scientists. But thanks to Pavel, a managing director of an insurance company. “A random guy.” Every catastrophic movie makes sense now.

For many months Pavel was not publicly known. We knew him as a “Mystery Man with a Mathematical Model” that convinced the prime minister about the seriousness of the situation but we didn’t know who it was. He went public in October.

Does this story scream “Czechia has a competent government that has everything under control?” I don’t think so.

Anyway, the virus basically disappeared in the summer. People mostly stayed outside and we had about 50 new cases every day. Government asked people to spend a vacation in the country to support local business. So this is me in the Jeseníky mountains: 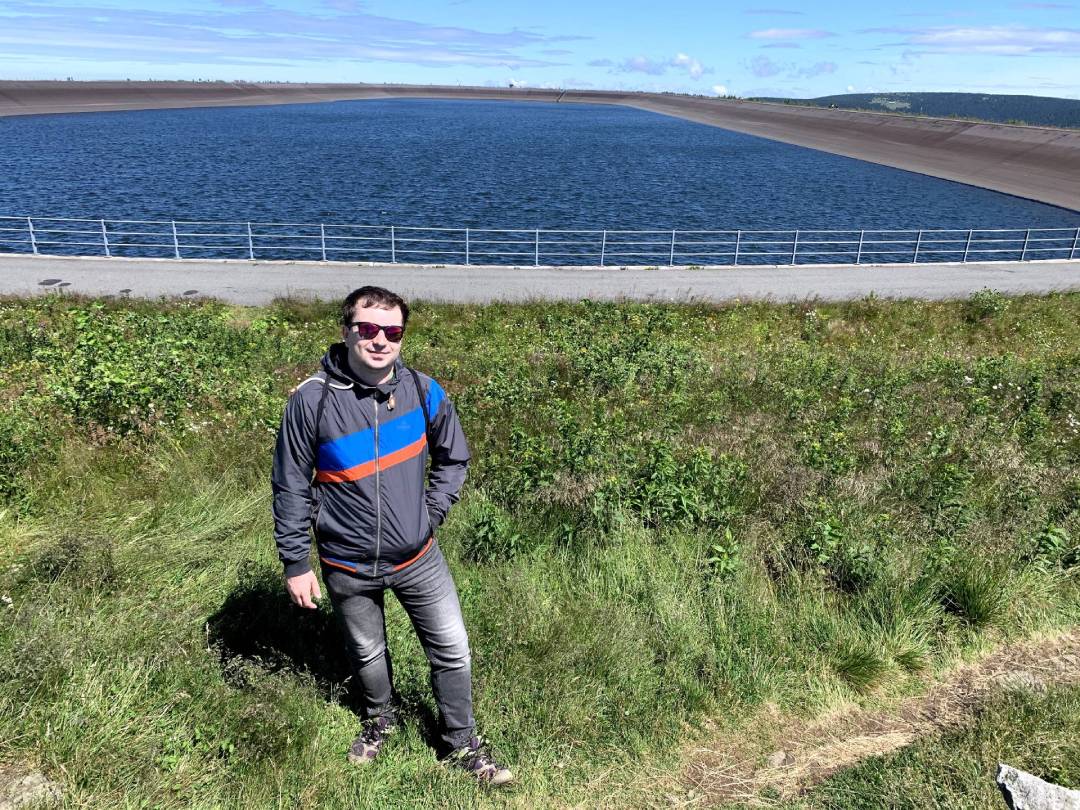 The thing behind me is the Dlouhé stráně, a dam on top of the mountain. It’s quite an impressive powerplant. We also visited Znojmo, a nice Czech city in South Moravia: 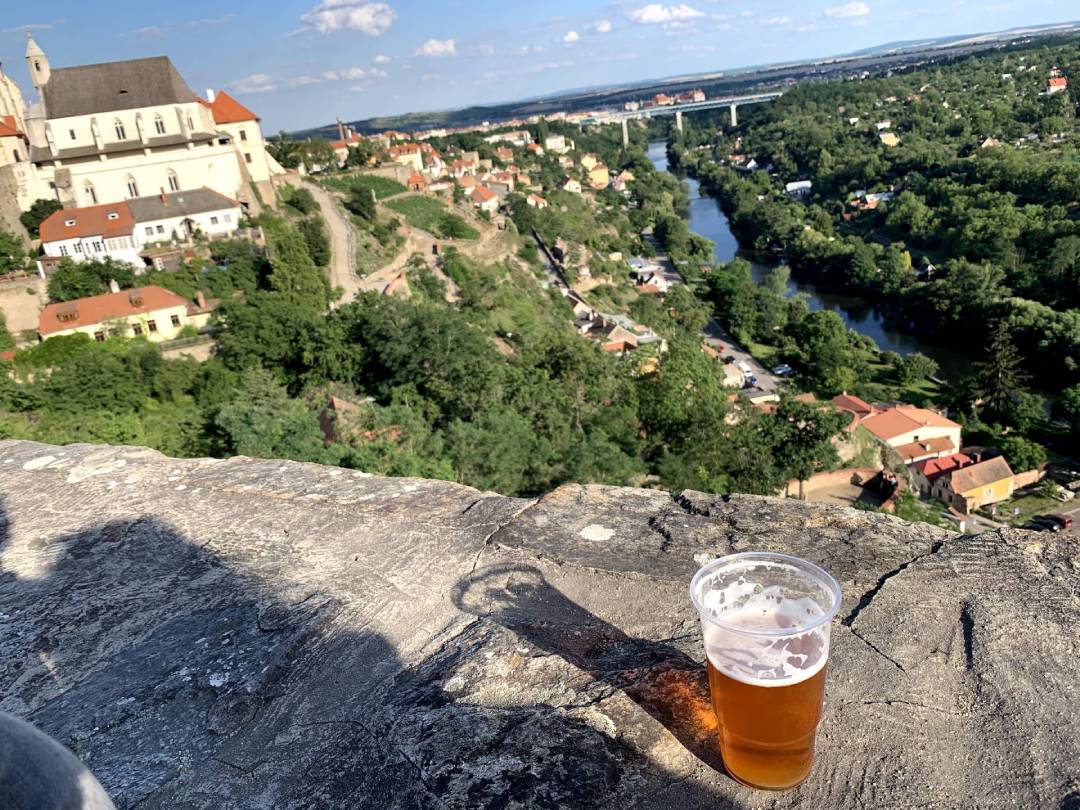 And this is our prime minister enjoying waves in the Mediterranean Sea. 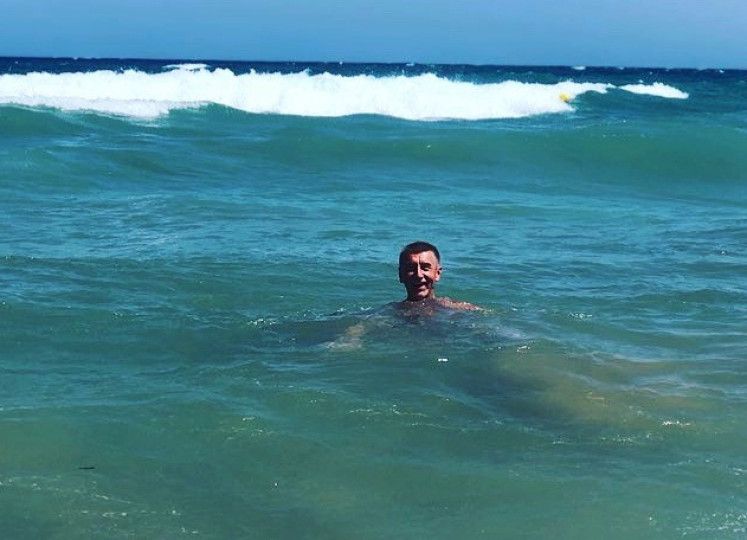 Wait a minute. Does the Czech Republic have access to the sea? Let me check the map. No! It does not! So this is our prime minister vacationing in Crete bragging about it on Facebook. So much for supporting the local business. I know – cheap shot.

The Preparation for the Second Wave 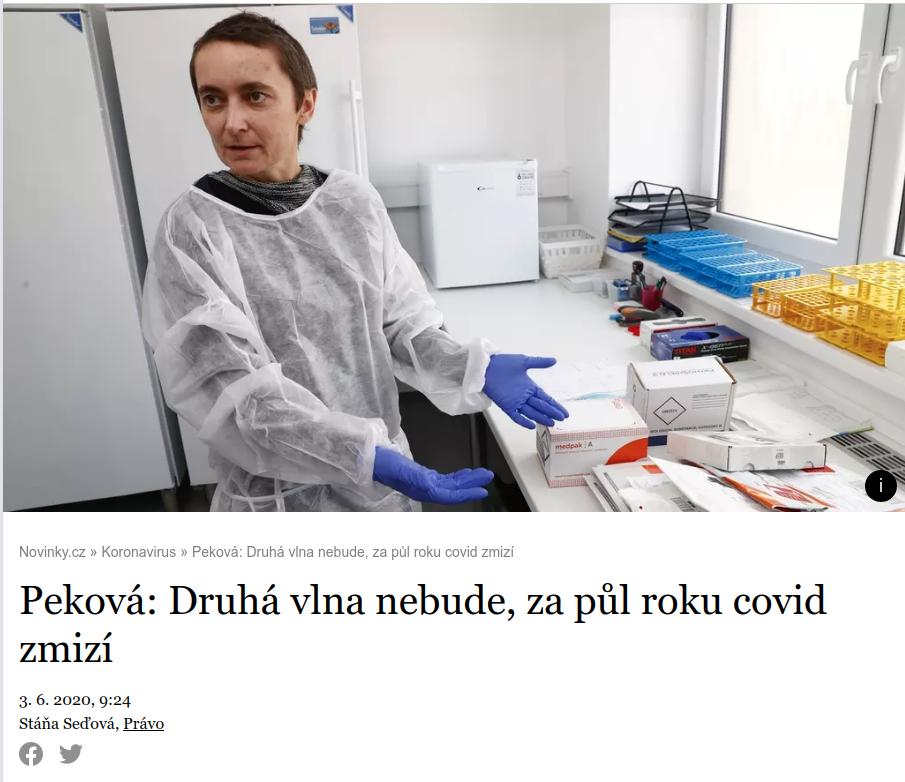 This is a molecular doctor Soňa Peková saying: there is no second wave coming, covid is going to disappear in a half year. She is quite famous in our country because she was the first one to detect a positive case in Czechia. What do the data say about the second wave?

And this was the theme of the whole summer. Everyone was sick of the news about Covid and we all thought we had already won the battle. People were warning us about the second wave but they were mostly drowned out by people saying “relax, there will be no second wave and even if there was we are prepared for it”. The prime minister sent a message to the journalists to write about something else than Covid because Covid is no longer a threat. Other responsible people were saying “the virus is much weaker now”. And people believed them. They wanted to believe.

But if you looked closely, nothing suggested that we were prepared. One example for all: the contact-tracing centers were supposed to use a new unified online information system. In reality, many of them used pen&papers for a long time and the last contact-tracing center joined the new system at the beginning of October which was too late. Feel free to use a Moleskine to write down your summer love story but please use an online tool when you are trying to save the republic from a pandemic!

One of the most iconic scenes happened on the 19th of August. The number of new cases was rising again. We had hundreds of new cases per day. Hence, the minister of health enforced wearing a face mask in every indoor space such as stores, restaurants, schools, etc. It was a decision made by scientists and other experts in the field. How did the prime minister Babiš react?

“I don’t like it at all.” He joined the expert group and a day later and he made the minister of health change the rules and we didn’t have to wear a face mask in restaurants and schools and some other places. Did I mention we had regional elections at the beginning of October? Who wants to make the voters unhappy a few weeks before the elections, right?

It’s starting to be quite sad, right? I’ll mix it up with a picture of our cat to cheer you up. So this is our lovely Raphael judging the prime minister: 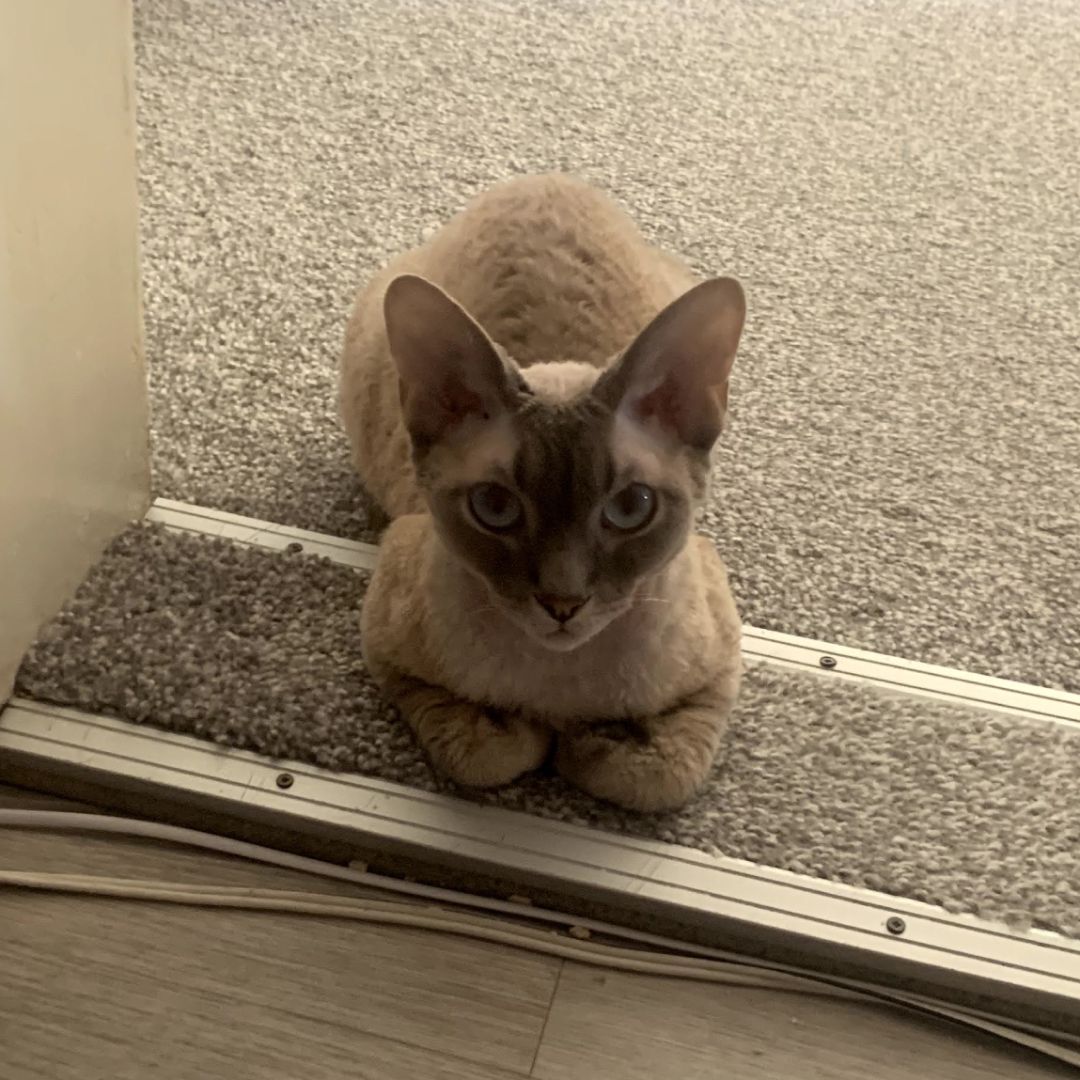 (And see those unlovely wires? They are my failures for a change…)

And the petition! At the beginning of October a new petition was written: “An open letter to the doctors, the parliament and media about so-called corona-crisis” (in Czech). They wanted the government to cancel restrictions, cancel the requirement to wear a mask, cancel most of the testing for Covid, etc. They also said that for most people the coronavirus does not represent any threat but they acknowledged it does represent a threat to the old people. The same threat as the common flu.

And who primarily signed this petition? The two most famous people are dentist Roman Šmucler and a cardiac-surgeon Jan Pirk. And a few homeopathy-based doctors. Hundred of thousands of people shared it or signed it.

How can you fight a crisis if half of the population do not believe there is one?

It’s time for another cutie! Boop! 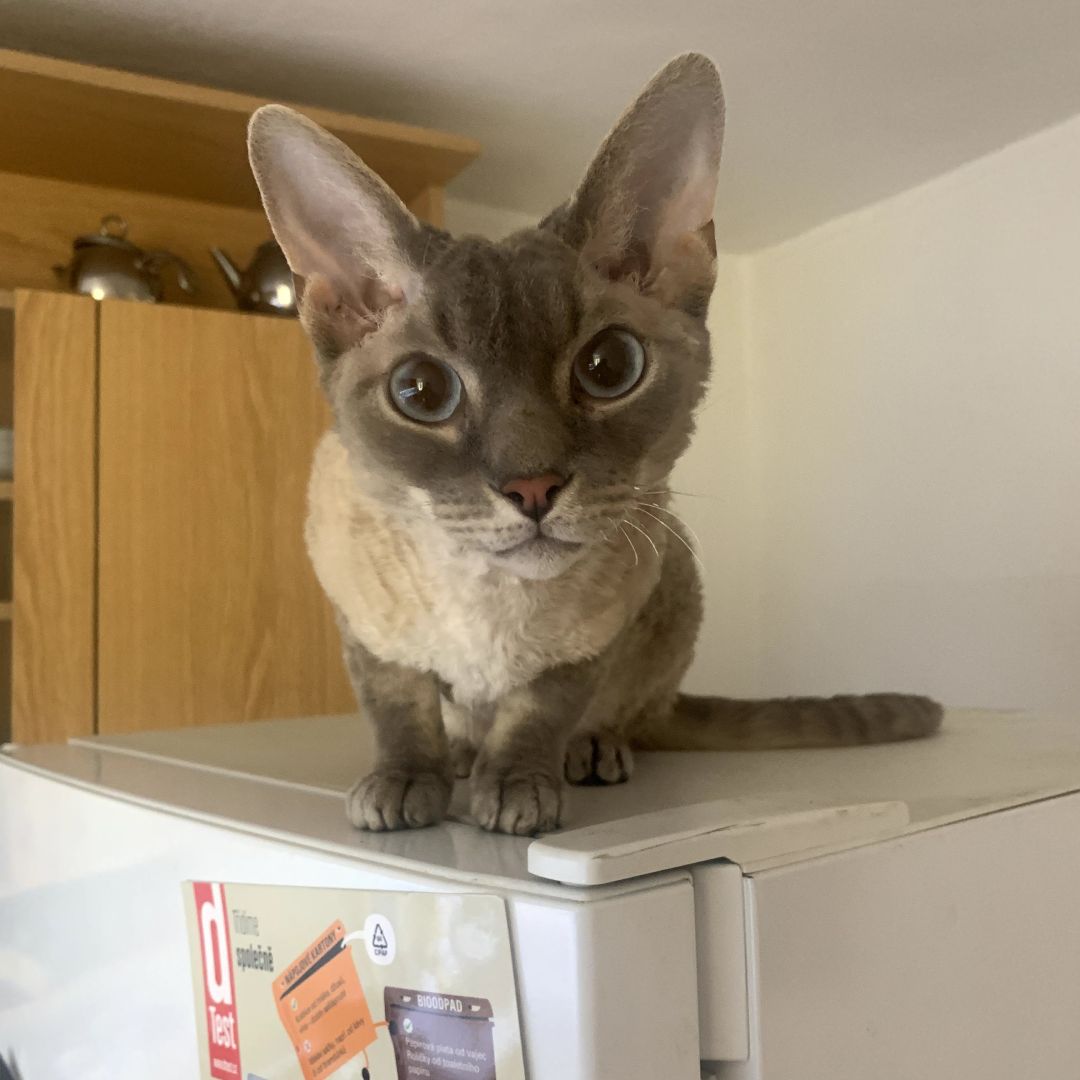 It’s Never Too Late To Have a Drink

On the 21st of September, Adam Vojtěch resigned as the minister of health and colonel Roman Prymula replaced him. Don’t worry, he is not a soldier at this moment but he used to be. The nickname “colonel” stuck to him until these days.

On the 21st of October, the emergency state was already in place, we were supposed to wear face masks even in public, all restaurants were closed. We were advised to stay at home. And a few minutes before midnight a couple of photographers took these pictures: 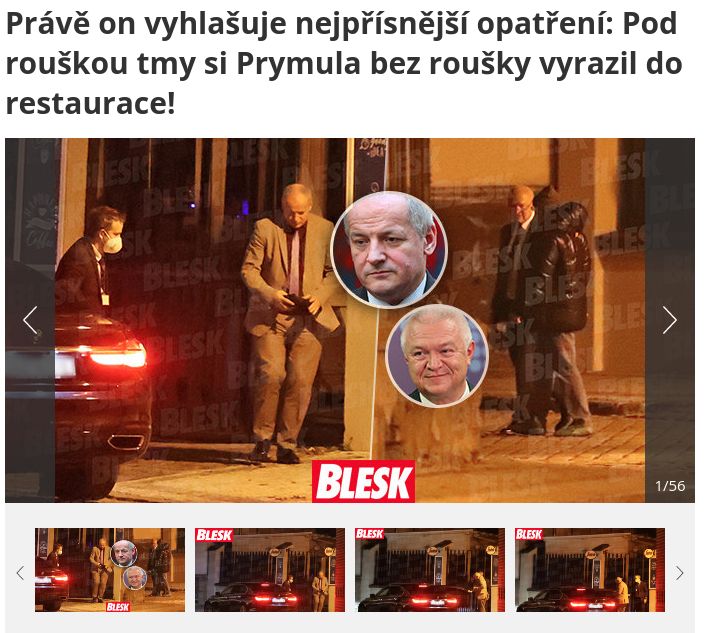 This is colonel Roman Prymula not wearing a face mask leaving a restaurant in the middle of night. And his reaction? “It’s no big deal.” Ah. Half of the country doesn’t believe we are in crisis, half of the country doesn’t follow the mandatory restrictions. Do you really think that the prime minister not following the restriction and saying “It’s no big deal” helps the situation?!

So, here we are. We are going to have a third minister of health. We have the highest amount of new cases per capita, the same for deaths. The only good thing is the hospitals are not full yet and there is still a chance they won’t ever be if we slow it down a little bit more.

But hey, no need to be sad about it. This is an improvised memorial in front of the restaurant that colonel Prymula visited and where his career ended: 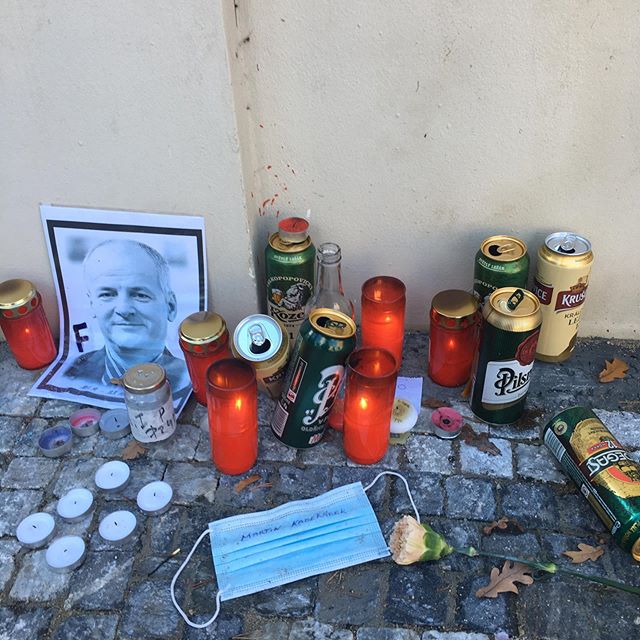